No More Burials at the Cemetery of the March Revolution 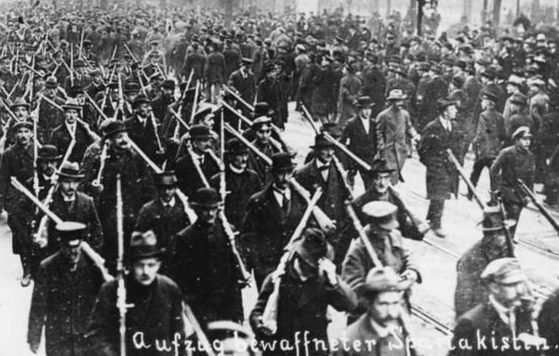 The dead from the 1918 Christmas conflict are the last to be interred at the Cemetery of the March Revolution. Further violent clashes erupt in Berlin in spring 1919, but no more burials are allowed alongside the graves of those honoured as freedom fighters in 1848 and 1918.

When the USDP (independent Social Democratic party of Germany) members of the council of people’s deputies resign their posts in the Prussian government and in Berlin, the government orders the removal of USPD police president Emil Eichhorn. This triggers major protests on 5 and 6 January 1919. Armed workers occupy the newspaper district, including the offices of Vorwärts, the main voice of the MSPD (majority Social Democratic party). An impromptu committee of revolutionists and KPD (Communist party) members calls for the government to be overthrown. The government deploys military force, sending in the newly-formed Freikorps militia. These soldiers violently suppress the uprising by 12 January 1919 and execute prisoners at will. On 15 January, Freikorps soldiers murder Rosa Luxemburg and Karl Liebknecht. More than 150 people die in the battles, 13 of them government soldiers.

Wolfgang Fernbach is born into an assimilated Jewish family in Berlin in 1889. His father runs a book rental business. Wolfgang studies economics and modern languages and develops literary ambitions. Following his studies he works as a journalist in London and other places. He returns to Berlin in 1914, becomes a radical opponent of the war and joins the Spartacus League. In 1918–19 he works as an editor of the Rote Fahne, the KPD newspaper. During the January uprising he produces the Rote Vorwärts from the occupied Vorwärts building. On 11 January 1919 he is one of the seven parliamentarians charged with negotiating a surrender with government troops. They are taken by soldiers to the fusiliers‘ barracks, mistreated and shot. Fernbach leaves behind his wife Alice and their five-year-old son Hans. As Jews, they will be forced to flee to England after the Nazis take power in 1933.

Burying the dead of January

Karl Liebknecht and more than 30 others are to be interred on 25 January 1919. The Berlin administration led by conservative Adolf Wermuth and the government oppose burial at the Cemetery of the March Revolution. The social democratic Vorwärts writes that the cemetery lacks space and describes the dead as „plunderers“ and „insurgents“. The funeral commission, whose members include KPD co-founder Wilhelm Pieck, switch to the Friedrichsfelde Central Cemetery in the district of Lichtenberg where well-known social democrats like Wilhelm Liebknecht (1900) and Paul Singer (1911) are buried. Tens of thousands join the funeral procession in late January. Paul Levi, Luise Zeitz and Rudolf Breitscheid speak at the graves. Rosa Luxemburg’s body is only recovered later and buried there in June 1919. A memorial for all the victims is installed in 1926.

In early March 1919, workers in Berlin go on strike to demand recognition of the councils, steps toward socialism, and military reform. Violent clashes take place on Alexanderplatz. On 5 and 6 March, battles break out between the people’s navy division and the Freikorps militia. Fighting spreads into the eastern part of Berlin. Following a false report about murdered police officers in Lichtenberg, Reich minister of defence Gustav Noske orders opposing fighters to be shot. By 12 March 1919 the contested areas are occupied by government troops, who subsequently execute many prisoners. Official figures list 1,200 dead, including 75 government soldiers.

Burying the dead of March 1919

No burial ceremony is held for the dead of March. Some are interred at the Friedrichsfelde Central Cemetery, including Leo Jogiches, the leader of the KPD following the deaths of Rosa Luxemburg and Karl Liebknecht. Like many others, he was arrested and then murdered, on 10 March 1919. An additional unknown number of dead are buried in a mass grave at the Parkfriedhof cemetery in Marzahn. A memorial stone there reminds visitors of Fritz and Albert Gast, brothers and sailors. They and others are executed on 12 and 13 March 1919 next to a cemetery wall in Möllendorfstraße in Lichtenberg. Two memorial plaques there mark the location.